It takes a hunter to make a hunter, they say.

Well, it takes a farmer to make a farmer, too.

Sure, you can learn to farm or hunt on your own. But the culture of hunting and farming, the deep ethics, the habits of walking the land, your five senses engaged – those come from a person in reverence with the natural world, and needing to eat.  The details show up over years of knowing a place, and being in relationship. Farmers and hunters see the patterns, notice the nature of the place and how the land changes.

A few years after the fire, we had beauty berry.  It had never grown there before.  And when the neighbor clear cut, the water changed it’s pattern across the land. To me, a good farmer is more than a business person using land to make a living.  That can be done without relationship.  A farmer is a person whose land provides a living, both sustenance and a way of life.

Farm School engages people of all ages through immersion on real farms, doing real work.  Experience is the very best teacher. Work and play intermingle on the farm. We return, again and again, to the joy.

She was born later, and did less weeding and bean picking. She wasn’t there when we put chickens and spinach in the freezer. But she was in our family, and she still grew up to become an adult farmer.

Her farm at Big Table inspires me. It calls me on when I fear I will always rent and never have a farm of my own. She did it. Her cows are mob grazing, her land getting restored.  Go Clare!  Big Table Farm 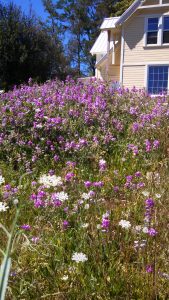 I’m not sure if it’s the dog or the soil today.

My daughter is studying chemistry. There’s no better chemistry teacher than the garden. I’m practicing here how to tell her the story.

You know the hydrogen  atom.  And, you know that hydrogen can be a charged ion that carries a positive charge.

Hydrogen is the maker of water. That’s what the name means. Hydrogen burns with oxygen to form water. That magic happened millions of years ago as the Earth formed. To join up with Oxygen, and make water, hydrogen has to share an electron.  In solution, hydrogen – this positively charged ion – share’s an outer shell electron with oxygen, and that polar covalently bonded molecule of 2 Hs and one O,  has a tendency to carry a charge on one side. OK, we accept this information as given (though it is a but mystical.)

That’s where plants breathing out carbon dioxide comes in. We’ll get to that.

When hydrogen comes along and bonks the calcium off a clay particle, and take it’s place, that leaves calcium free for the roots to grab.  Bam! Cation exchange!

Because we have red clay, we have minerals.  Clay can hold these positively charged nutrients because it has negative charges and can grab onto the positive charges.  When the plants breathe, the roots’ let off CO2 (carbon dioxide)  that combines with H20 (water) and reacts chemically to make carbonic acid and hydrogen – a positively charged cation.  That hydrogen then goes to work knocking off other cations. Then the root can take up the other nutrients, and hydrogen is bound up in the clay.

Again, as the root “breathes”, hydrogen that was bound up in water as a hydrogen ion is released into the soil where it goes along freeing up other cations to become part of the plant.  As hydrogen integrates into the soil, attaching to clay, it releases other minerals, which the plant then grabs up.

The other key characters, those other cations such as calcium, magnesium, potassium, sodium, help raise the pH. There is more potential for hydrogen again once the excess Hydrogen ions are no longer roaming free.

The more of the cations we have, the higher our pH, and the more alkaline our soil is.  The million dollar question is, what kind of alkaline are we talking about?  Just “alkaline” doesn’t tell you much about which characters are at play. What if it’s all magnesium and little else?  In soil, we need to know more than simply the pH. We want to know which nutrients make up that number.

Cation Exchange Capacity (CEC) is simply the ability of the soil to grab onto and release these elements.

Sand is Sio2, silica dioxide.   This little blue Boiron bottle of Silicea is silica.  I am taking it right now to help my tendons repair.  Our bodies are much the same as the earth where they began.   Silica makes up a tremendous amount of the earth’s body. Sand does help create pore space in soil, but other than that, it does not provide needed minerals. The silica in sand is bound to oxygen.

The less abundant but very important minerals are found in the clay, and, there are different kinds of clay with different combinations of minerals. The names are chewy words, sticky, like clay itself.  Montmorillonite, kaolinite, vermiculite. I met them in Geology and never forgot their names.  Calcium, aluminum, hydrogen, oxygen, magnesium and silica all make up montmorillonite.

Whoever divided poetry and science made a grave error.

We’re not giving up on our old ideas – having fun on farms with kids.  But for now, we are focusing on supporting those who know how to get the good of the land, by helping them thrive there.

Farm Finance workshop coming up May 7!

Leave with tools that simplify your administrative time.