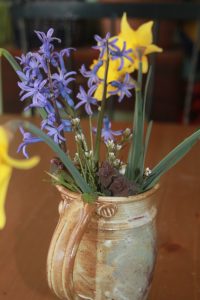 My son waited until I discovered the clump at the edge of the woods before plucking one for the table. Oh how I love the bulbs for their early hope, and my son, for knowing his Mom so well that he finds ways to love her… just as she would hope.

At least once a day we talk of the summer, of camp, of the games we can play and crafts we can make. This time, the discussion centered on ways to sort through all the options – as a group – when the students arrive.  Again, my daughter is considering these management topics, while my son considers infrastructure. He requested pots of flowers.

It never fails: kids, a creek and beaver activity. They have this in common: they must stop the water.

After two hours, they’d packed enough logs and needles to make the water rise five inches on the high side of their dam, enough to cover the rocks.

Who gave orders, and who followed them, wove into the dance of forming friendship and making memories.

As for upsetting the local ecosystem, I’d say the rapid rise of the creek last week (to the point of overflowing it’s banks) likely caused a greater impact on the local fauna than a small dam that will wash out within 24 hours; the memory of this day might not wash away even in 24 years.

Life choices, including care of this planet and finding inner peace in the natural world, may take root in part, in the building of a dam, in a creek, one warm winter afternoon when she was 11.

Jacob the ram is as sweet as they come.  I can scratch his head and lead him around by his horns.

He is also… a ram.  It’s breeding season, and even a docile ram does not like being alone without some ewes to look after. I must find him a new home.  Today I called and sent photos to Perfect Spot Farm in the mountains. This two year old boy is purebred, in excellent health, has been mostly grass-fed (but for winter when forage is thin) and would serve a farm much more than a freezer.  Spread the word, this wonderful wool is great for hand spinning, with nice crimp and softness. Jacob, the Jacob, what will we find for you?

God bless the Sun!  It’s so fine to see the hens happily pecking about the yard, all of them alive and well and just fine.  OK, so, I fretted a bit too much. I’d rather err on that side.

As for the new dog, well, my dear strong spouse has encouraged me to buck up and accept what we started. It’s a terrific life lesson, so I said, “I’m in” and we’re off, to train an old dog and a boy (and clearly me too) about forging relationships and making commitments.

The wet snow is pulling down large limbs.  A huge branch fell on the studio.  It only hit the porch with no damage to the building as far as we can tell, but the tree is forever changed.  We’ll see in the morning the extent of the storm’s impact. The heavy winds and bitter cold have yet to hit. I am shaking inches of wet snow off sagging dogwood branches as I travel the property tonight in the dark. The sheds are collapsing under the weight already, and we’ve been out there for an hour shaking off wet snow from the tarps. I came in to warm my hands and eat some chocolate, before heading out again.

I am ashamed to admit it, but with the sagging tarp roof, some of the hens got wet.  Worried, I turned to the chicken forums where the general consensus seems to be that as long as there is no chilling wind, they should be okay.  I am heading out to hang tarps now around the pen, which is something we usually do every winter but it’s been in the 70s and, well, I used the tarp for the ewes then didn’t put it back.  Yes, I broke a system we’d set up. This behavior is quite defeating for those around me; they find it puzzling and frustrating. When I was a child, my Dad would call it robbing Peter to pay Paul.

On the up side, chickens are relatively hearty animals, and I did fill their crops tonight with plenty of grain, as well as give them fresh straw to rummage in before they flew to the rafters to huddle as a group.  I am still concerned though, and will check on them through the night (since I’ll be up anyway to let the new dog out).

New dog?  Um, maybe. She’s here on a trial basis at the moment. Just to add a whole new level of stress to the day, this newly adopted shelter dog (picked her up twelve hours ago and have ten days to decide) is now launching her German Shepherd/Husky chest and paws up onto the kitchen counters to see what’s available.  Oh my goodness I am coming unraveled!

I hate it when I feel like a bad farmer, but I know this is part of the process for every farmer.  This is how we learn where the holes are. Four inches of wet snow, followed by freezing temps and ice, on top of a string of soaking rains and just after a string of days in the 7os makes for, well, a challenging dance with the environment to say the least.

On a good note, the ram and ewes are on dry beds of straw, and the ducks decided to hole up under the house. The cat is sleeping on his heating pad, the other dog is in his crate fast asleep, and the children are in their beds. Some of the night is in order, more to follow.  Off to tarp the walls!

To morning, sunlight and thawing!

For camp, my girl decided we could pull two names out of the hat each day and those two people will be the stars of the day.

Today I took out the kids’ material for what were to be Christmas pillows. I set my Mom’s vintage 1950s Singer on the kitchen counter and filled with emotion and excitement.  After months of delaying this joy, I was about to embark. But, as with all journeys, there are often a few last-minute hurdles.  What followed was a one-hour conversation/on-line-search. There was Mom on one end, in frigid Wisconsin where she reported, “It’s too cold to snow” and, me on the other, here in a balmy, rainy Carolina. The salamanders looked on as we researched and located the bobbin case needed to get the 500 series back in operation.  Mystery solved and sewing window closed, the material went back in the box, and I placed an eBay order for $12.95.  The case should be here by the 18th.  I am excited to start sewing again, and this time, with a real machine instead of my daughter’s toy machine!  Maybe someone will want to sew while at camp.

Last night, after the kids went to bed, I took out four barrettes, glued grosgrain turquoise ribbon on them, and strung the glass turquoise beads my daughter gave me for Christmas into a matched set of Mom and Daughter hair pieces. This morning they were waiting in the cotton-lined box that had held the bead gift.  My daughter looked and said nothing, but I could see her eyes shining. I couldn’t resist teasing. After all, it was her idea to make matching barrettes.   “Close your eyes and hold out your hand.”  She did, and said, “I already saw them.”  I placed her finished barrette in that small palm and hugged her.  She looked down and a slow smile escaped.

Some girls are like that: quiet, reserved, and not wanting anything made too blatant.  I recall feeling that way about boys I liked. Saying their name aloud would put a hex upon my hopes. For the most part, I’m an extrovert, but I am very grateful to have a daughter who reminds and teaches me about the secret inner life of young girls. I am so looking forward to seeing the girls exploring and connecting this summer, and seeing my girl mix in with them. She is very serious about camp.  She brings up a new issue every day that we need to consider, and repeatedly they are thoughtful concerns for the increased happiness of the participants. She is thrilled to share her life and home. That makes me deeply happy.

Hubs just finished a quick one-page website for me so I could spread the word about camp. (See link at top “Camp”)  I am getting soooo excited for this summer.  Today we bought supplies to make soap. (These things must be practiced, after all.)  Taking down the Christmas wreath wasn’t half as hard with crafting ahead. Plus, I used the berries to make a heart.